Today the Nobel Prize committee said Ethiopian Prime Minister Abiy Ahmed, winner of the 2019 Nobel Peace Prize has a “special responsibility to end the conflict and contribute to peace” in Ethiopia where Tigray remains under a complete blockade.  About the current situation in Tigray they added “The humanitarian situation is very serious, and it is not acceptable that humanitarian aid does not emerge to a sufficient degree”.

Once seen as the emergent African nation of prosperity and democracy instead its honor and status has fallen precipitously  to competing with North Korea, Iran, and Eritrea for the most evil pariah. Everyday at least 40 children die of starvation, 50 innocents are killed by air or drone strikes, all the while over 7 million Tigrayans have continued to be without food, medicine, power, travel ability, or communication.  More then one hundred thousand are held in concentration camps in Western Tigray, in the areas around Addis Ababa, Afar, parts of the Southern Nations regions of Ethiopia, and even now in Eritrea.

Once a champion of free speech and free press, Ethiopia has jailed more journalists than any other African nation. So called terrorism laws allow journalists to be jailed indefinitely without due process for printing any information not explicitly approved by the government.

Estimated to be more than $60 million in debt within the next year, government estimates that the pre-war debt would take 3 years to pay if there was greater than 8% growth are now impossible. In reality it may take a whole generation if ever. The per capita income has dropped to $700, birr has halved in value, Ethiopian bonds are now rated junk, and world wide interest in investment in unstable Ethiopian state has withered to almost nothing.  Chinese news sources have indicated they continue to withhold $339 million in further loans because Ethiopia is unstable.

Using euphemisms instead of the word, genocide, does not save lives or stop genocide. Instead of applying the precautionary principle of the UN Geneva Convention the delay in the official recognition of genocide directed against the people of Tigray and by Eritrea, Ethiopia, United Arab Emirates, and Turkey  follows a sad pattern previously seen in Rwanda, Darfur, and Bosnia. Rather then directly confronting the offenders with the truth of an ongoing genocide the international community is once again delaying declaration of genocide based on the false hope proven by previous catastrophic experience that using lesser terms will allow diplomacy to bring a change in behavior. Using lesser terms only empowers the genocidal power to continue deprivation and killing.

Ethnic cleansing ( a term created during the Bosnia war), population displacement, and civil war are examples of terms that are lesser then genocide and do not trigger international sanctions. A years long total blockade of Tigray has resulted in total lack of health care and food supplies while targeted attacks on civilians have together resulted in hundreds of thousands of deaths and continues to threaten millions in Tigray as already documented by the UN.

Academic study of this failure to respond has been well studied by public health researchers.  Using euphemisms instead of the term genocide always resulting in more death and destruction. Because the cost of human lives has so often been catastrophic the United Nations Convention in 1948 was created to function with a Precautionary Principle which stresses early intervention to stop the killing as soon as possible. Once reasonable suspicion is raised the burden of proof is changed from those suspecting the genocide to those carrying it out under international agreement. Despite this the 20th century saw over 170 million deaths from genocide.

Is the primary agenda of Martin Griffiths preservation of the state of Ethiopia or relieving the horrific human suffering of the people of Tigray?Why does he only talk in vague generalities about why aid can not get to Tigray?

Martin Griffiths, the relatively new UN Aid Chief, has complained of worsening famine and deprivation in Tigray for months but has refused to assign any blame on Ethiopia and Eritrea. Instead he seems to consistently present a scenario that he has believed his personal conversations with PM Abiy Ahmed that the epidemic human catastrophe is not his fault but he will take positive action to help. Meanwhile the Ethiopian Eritrean “de facto” blockade as described by many in the UN remains at the forefront of their policy of genocide. In his final statement he said preserving the Ethiopia state was of primary importance this week. While Mr. Griffiths spews his misguided and damaging optimism just today the Ethiopian government expelled seven more vital UN humanitarian workers.

Several months ago when it was clear that a growing famine was gripping Tigray as well as state directed genocide by Ethiopia and Eritrea against Tigray persons and property, Martin Griffiths, the new UN Aid Chief appeared quite naïve about the true intentions of Prime Minister Abiy Ahmed and his Amhara expansionist supporters. After speaking with the Prime Minister he proclaimed that Tigray should immediately join the ceasefire because Ethiopia had helped prepare a good harvest for Tigray.

How did he not know what the Ethiopian appointed Interim Administration of Tigray was saying that Ethiopia intended to block any planting? He said Ethiopia wanted a peaceful solution and that Tigray had extended the war.  Yet throughout Tigray during the so-called ceasefire businesses and factories were destroyed or dismantled then shipped to Eritrea. Elimination of male children was being carried on by Amhara militia and Eritrean forces in Western Tigray. A complete blockade of not only food but also medicine and fuel was begun.

Then many weeks later Mr. Griffiths visits Tigray and finds that schools have been destroyed by Ethiopian and Eritrean forces and then asks why are they not rebuilt? He openly hints that somehow the Tigray are limiting aid and does not even mention any role of Ethiopia.

Now finally on September 28th this week he mentions that communication, power, water, food, medicine, and health care creating a nearly unprecedented man made famine. Finally he mentions that Ethiopian government allegations that international aid agencies are helping the Tigray is false. Yet again however he praises the talks he has had with Ethiopian government that now there is a “change” in government which will change direction. He continues to use language which places no blame at all on Ethiopia even though other high ranking UN officials have called the situation a “de facto” blockade by the Ethiopian Eritrean genocide attempt on Tigray.

In his quest to continue blockade of potential vital supplies coming into Tigray possession Abiy Ahmed has extended embargo of electricity, fuel, food, medicine and other supplies to Tigray held areas of Amhara. This is creating anger at the Amhara and Ethiopian Federal governments.

Numerous Amhara media outlets are complaining that much of the Amhara region which has been effectively occupied by the Tigray Defense Forces are now without electricity as well as running low on fuel, food, and medical supplies. Upwards of a million displaced persons are said to be in or near Dessie and/or Bahir Dar.  However, officials of the Amhara National Movement and other local officials are complaining that the Federal Ethiopian government is not doing anything to help them. For its part, Getachew Reda, spokesman for the Tigray Peoples Liberation Front government of Tigray says they will try to help with what resources they have. The streets have been filled with protestors demanding government services. There are also complaints that the city’s youth are not being given weapons to defend Dessie. Although somewhat “Amhararized” many in the city have Oromo roots in ancestry and tradition. Some have theorized that is why they are not be given weapons. 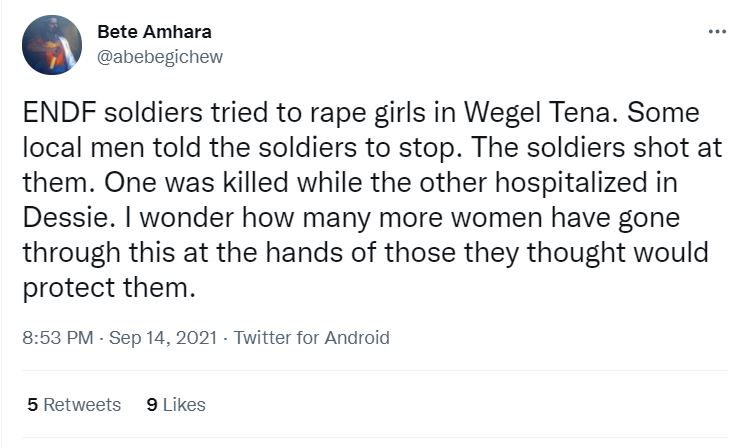