Updated 9/4/2021 Killing thousands of innocent villagers, raping thousands of women and girls, as well using starvation as a weapon in the name of Jesus Christ does not justify war as claimed by Amhara President Agegnehu Teshager.  Instead more than a thousand years of history and theological tradition for both Christianity and Islam about what constitutes a just war supports that the Tigray regional state is the righteous party.

When is conflict a just war (Jus ad bellum)?

Both the Bible and the Qu’ran both say that war is a condition that will always afflict mankind. Jesus Christ said that man will always suffer calamities both natural and war between states. The Apostle James said that wars are caused by the “lust” of what the other party has obtained and selfishly wishes to take through violence.

The ancient Jews, the Babylonians, and the Romans believed that a violent response to war was appropriate if it was of an appropriate measure to the offense suffered. A principle known as lex talionis.

There has always been a Christian disagreement on whether Jesus called for complete pacifism in responding to violent offense which would theoretically best diffuse malintent and prevent a sinful response. Ultimately the righteous would be rewarded for their suffering in this world or the next. Dietrich Bonhoeffer, the 20th century German theologian, advocated complete pacifism which led to his execution.

For centuries beginning just a few hundred years following Christ an alternative theory has been that war was justified under specific circumstances. Jesus’s call to “love thy neighbor” and that “giving up one’s own life to save another” are acts of faith as well as his “righteous” anger at the money changers in the Temple have been interpreted to mean violence can under certain conditions be responded to by violence.

Discussions of just war began with classical Greek and Roman philosophers like Plato and Cicero and were added to by Christian theologians like Augustine and Thomas Aquinas. Continuing to contemporary times Catholic Pope Benedict XVI said that “defending oneself and others was a moral duty and obligation”.

1. The war must have a just cause – such as against invasion, or for self defence – and not to acquire wealth or power.
2. The war must be declared and controlled by a proper authority, such as the state or ruler.
3. The war must be fought to promote good or avoid evil, with the aim of restoring peace and justice after the war is over.
4. The war must be a last resort when all peaceful solutions have been tried and failed,  such as negotiation.
5. The war should be fought with “proportionality”, with just enough force to achieve victory and only against legitimate targets, i.e. civilians should be protected.
6. The good which is achieved by the war must be greater than the evil which led to the war.

Islamic law allows the use of force in self defence and in defence of those who are oppressed and unable to defend themselves.

1. Only under certain conditions allow anticipatory self defence.
2. Only the head of a Muslim state (a ruler or caliph) is allowed to declare jihad.
3. Islamic law imposes certain restrictions on the use of force in self defense, i.e., military necessity, distinction, and proportionality.
4. Accepting an offer of peace and humanity are also relevant conditions. If an enemy stops fighting then the war must stop and peace immediately sought.

The onset and course of the conflict

After the selection of Prime Minister Abiy Ahmed in 2018 he began to diminish the power of the Tigray People’s Liberation Front (TPLF). Being just 6% of the population they had little representation in the Parliament. Although there was a brief honeymoon, the PM began to decrease their power by cutting the regions budget, labeling them as terrorists, and removing them from positions of authority in government. There existed a bitter feeling of resentment especially in the Amhara region against the TPLF for claims that the TPLF had illegally taken land from the Amhara region and carried out violations of human rights on Amhara in past decades. Ultimately the Parliament under the PM’s direction labeled them a “terrorist group” unable to hold any position in government. No formal actions called specified in the Ethiopian constitution were carried out which were created to settle disputes between member regional states. Action by fiat was carried out without attention to legal remedy for accused wrongs.

Several attempts were made to land Federal police forces in Mekelle to arrest prominent TPLF members which were repelled. Then on the early morning hours of November 4th the Ethiopian National Defense Forces in Tigray and the regional Tigray police and militia forces went into conflict. The exact circumstances are unclear although it seems to may have been a pre-emptive attack by the TPLF.

The Tigray region was overrun by Amhara militia, ENDF, and invading Eritrean forces causing a retreat by the TDF(Tigray Defense Force). There have been reports of atrocities by both sides although clearly the enormity of starvation, extra-judicial killing, prisoner execution, raping of women, killing of children, theft of property, destruction of medical facilities and utilities, ransacking of schools, etc. is overwhelmingly evident to be by the Ethiopian forces and their allies.

The TDF has rebounded and is now almost at the gates of Addis Ababa having basically decimated the Ethiopian forces whilst the Tigray civilian population has no water, no food, no electricity, no hospitals in good shape, no medical supplies, ransacked schools, no phone, no internet, and an ongoing siege against supplies except for a small trickle.

The government of Ethiopia has maintained that it is performing a law enforcement action against Tigray while maintaining that there is no hunger problem and that they are acting on the best interests of the Tigray people despite the fact the TPLF won more than 9o% in an election shortly before the war started and by the words of the Prime Minister that the people of Tigray were too supportive of the TPLF.

While at the same time saying that the Tigray people(Tegaru) are somewhat innocent of wrong doing the government of Ethiopia has not recognized that they have any standing or rights in persecution driven by ethnic identity. The elected government of Tigray acted in self-defense against egregious acts of failing to provide basic human services which threatened the security, livelihood, and lives of over 7 million Tigrayans. There are constitutional and federal proclamations available which could have been used to address the grievances against the government of Tigray. It is glaringly obvious that the savage military campaign carried out and continuing by the Ethiopian government is really a lust for revenge and power. There was no threat to Ethiopian government evident until the situation escalated by the unconstitutional actions of the Ethiopian government. 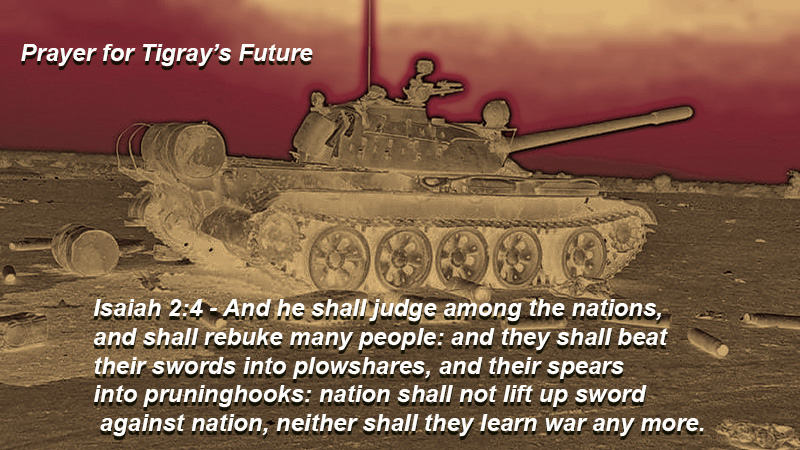