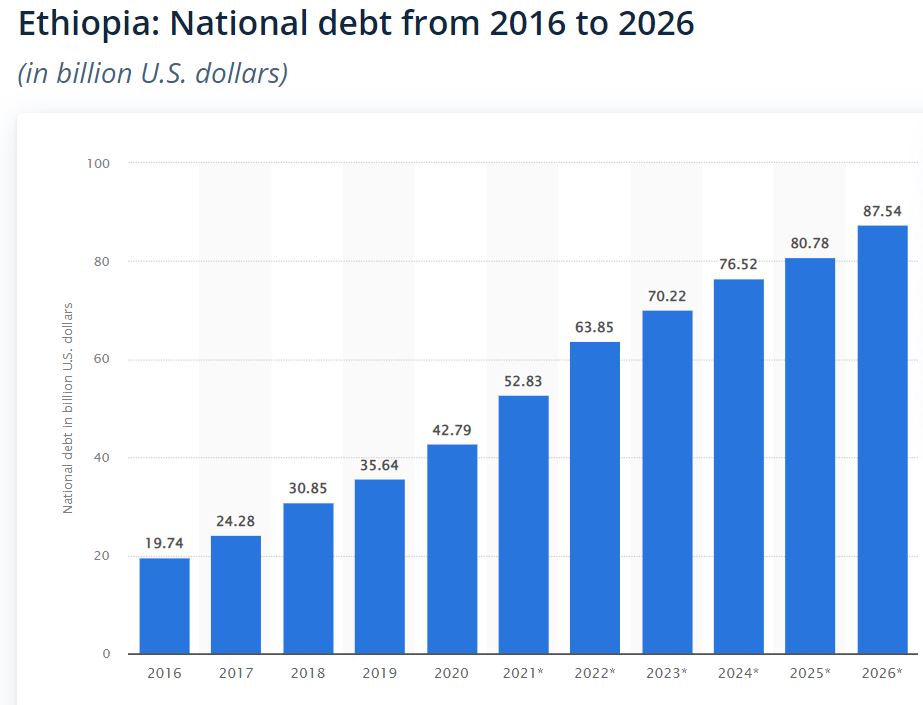 The latest estimate of the debt the Ethiopian government owes to foreign lenders shows it growing by more than $10 billion per year reaching $70 billion by the end of 2022. Since Abiy Ahmed took power it has more than doubled. It is important to also remember that Abiy Ahmed is spending about $50 million per airline flight of weapons from Turkey and the United Arab Emirates of which more than 15 flights have been documented which have not been officially financially documented.

Meanwhile medical supplies, COVID immunizations, food imports, fuel, and other foreign produced goods normally imported are being severely restricted due to the emphasis on war spending through out Ethiopia.

The Ethiopian economy which recorded 10% growth annually for the 10 years prior to Abiy Ahmed coming to power is now showing losses estimated to be negative 2% this year. Most economists agree that the debt to GDP (Gross domestic product) ratio should be less then 60%. Above 70% economic growth is hard to attain which Ethiopia has exceeded.

With the prolonged war in Northern Ethiopia which is unlikely to end soon, western democracy sanctions against Ethiopia, millions of displaced persons, locust swarms, abnormal rain patterns, and low COVID vaccination rates there is no doubt that there are now factors present to improve the economy it will only worsen. Abiy Ahmed’s government has been untruthful in trying to claim economic growth rates of 6% this year.

Ethiopia imports about $14 billion in goods while only exporting $ 3.4 billion. The United States stopping trade under violations of human rights clause in the African Growth and Opportunity treaty will result in up to $200 million in annual losses. Other European countries are also joining in sanctions.

While in good times before the war the average Ethiopian family made about $850 per year this amount has been significantly decreased by the rapidly declining value of the birr which is now 1 dollar=48 birr this week. A decrease approaching 50% devaluation over the past year. Now to repay the growing debt the Ethiopian government would have to tax the average family $648 per year to make the debt service leaving just $200 a year for living.

Lack of honesty in the economic situation as well as the above factors have resulted in government bonds of Ethiopia reaching junk status. Currently France and China are trying to work out a new repayment plan but Abiy Ahmed has failed to produce an acceptable austerity plan on which they can agree. Many analysts are questioning how Ethiopia in its current state can economically survive?