The official dehumanization of Tigrayans by  Ethiopian and Eritrean supporters combined with social media celebration of murderous acts against noncombants  belays the clear intent of evil intended to be rendered. While nefarious propaganda from supporters of the Ethiopian and Eritrea governments claim there is no proof of genocide now numerous and growing examples have been posted on Facebook and other social media as egregious records of duty by members of these forces themselves. 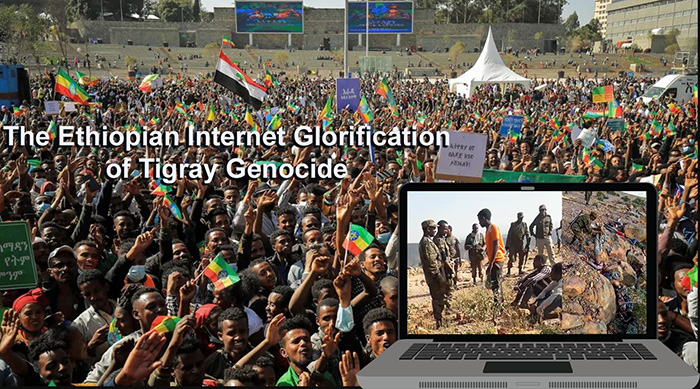 Numerous social media exists even before the conflict with Ethiopia government officials and their clerico-fascist supporters in the rogue Ethiopian Orthodox Church and Protestant factions who say Tigray require complete extermination and support the blockade of food, medicine, and other basic necessities even though this violates the United Nations Declaration of Human Rights to which Ethiopia is a signatory by membership. This attitude was no doubt an aggravating factor in generating the ongoing genocide of Tigrayans.

One example now well documented by Tghat is Geremew Demse from the Amhara region and at one time a member of the United Nations Peace Keeping Force in Sudan. He posted pictures and video where he selects a male teenager to be executed during the  Mahbere Dego massacre. Subsequently a long line of many young men is seen being marched to their death.

Unfortunately this is just one of at least hundreds or maybe even thousands. The Bureau of Investigative Journalism and the Guardian have reported that Facebook has been inept in impeding these practices. Many nonpolitical Tigrayans living in other regions of Ethiopia whose families have been abducted and killed leading experts to believe that these were “vigilante” actions inspired by social media and encouraged by Ethiopia and Eritrea. One such case out of many is Gebremichael Teweldmedhin, a Tigrayan jeweller abducted three months ago in Gonder, a city in the Amhara region.

While Facebook has been under severe criticism by media critics for allowing this practice to continue almost unabated there has been not a single word from the Ethiopian or Eritrean government. This can only lead to the conclusion that Abiy Ahmed and Isaias Afeworki endorse this method of inflicting hate into their followers and promoting more terror upon the Tigray people.